This might be one of the best article I have read today. 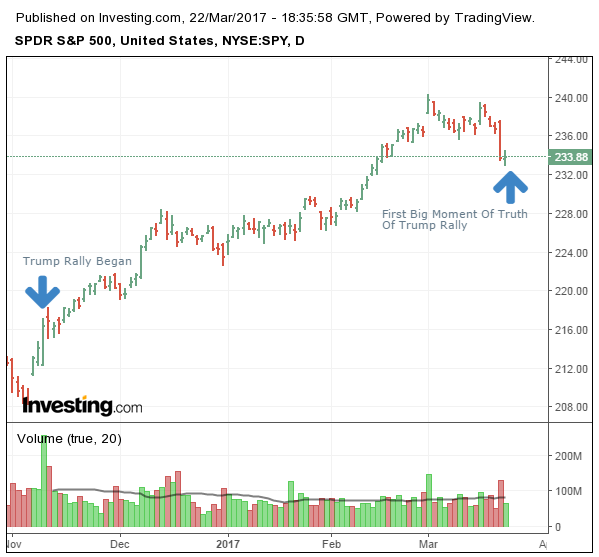 After the historic four-month stock market move that was triggered by President Donald Trump’s election win, the S&P 500, Dow, NASDAQ and Russell 2000, have their first real, potentially climactic moment of truth today. The House vote on Trump’s healthcare plan, the AHCA, will be the first test to see if President Trump has the clout—and political prowess—to get his pro-business agenda passed later this year.

His ability to repeal Obamacare will be that test. If he’s able to muster the support needed from fellow-Republicans, markets can shoot up with confidence, knowing Trump can get his pro-business agenda through Congress when it comes up for a vote later this year.

If not, look out markets.

Two market irritants caused some volatility earlier this week. FBI Director James Comey’s testimony was a not-much-news bother on Monday. That was followed by a cross-fire of harsh words between Republicans as the repeal of Obamacare lost some momentum ahead of the key debate and vote today. Putting it together, markets simply asked, “Are we sure we’re going to get all that pro-business stuff we all bought into?”

Now, markets are shifting focus to the Republicans’ ability to unify in Congress and repeal Obamacare later today. It will matter.

In his opening remarks on Monday James Comey said:

Sorry, but that’s not nothing. It shouldn’t be ignored. That officially gets our “Something Rating.”

Most of the five hours worth of hearings were repetitive and pretty snoozy, unless of course, you’re a law buff who enjoys watching teams of lawyers show off their facility at expressing things in legalese. But that one sentence above, from Mr. Comey, could very easily become a problem for markets this year.

Holding people close to President Trump accountable is a market risk. Of course, many times markets will look right through political issues, but this story has the ability to be big enough that it could affect economic expectations.

If the White House is going to be snagged in an investigation, President Trump’s loss of clout could diminish his ability to pass these market-loved plans.

This week, markets were caught in the crossfire as President Trump and some Republicans worked to coerce fellow Republican hold-outs to vote for the repeal of Obamacare.

Markets may not care about Obamacare, per se, but markets do care if Republicans can—or can’t—actually get things done. If they can unify in order to pass this first major piece of legislation, markets will have more confidence that Republicans can unify when the time comes to vote on future legislation as well.

What other legislation is still pending?

Markets don’t care that much about Obamacare, but about Republicans.

If markets can see Republicans unify to repeal Obamacare, markets will have confidence that Republicans can unify for near-future battles on legislation that will actually matter to markets.

This week’s gunslinging was not trivial to markets. Whether Republicans are successful—or not—during today’s vote, will have important perceptive consequences if markets will have confidence regarding more important legislation down the road.

“The data have not notably strengthened.”

In the back of every investor’s mind is this fear: we are in a trajectory of higher rates while the economy has not picked up. Inflation has picked up slightly but growth has not.

That combination is obviously a risk since higher rates can slow growth from the current pace. That slowdown would come from an economy that has not “notably strengthened.”

Combining The Economy And Politics

When you put it all together, markets probably need Obamacare to be repealed today. If not, a strong message will be sent to markets that despite Republicans owning Congress and the White House they still may not be able to pass the all-important pro-business legislation that’s been promised.

Many attributed the markets’ jump since November 9th’s election results to President Trump’s pro-business agenda. Those who did will probably sell if they are spooked by a Republican failure today.

What If The Obamacare Repeal Doesn’t Pass?

We’re not so sure that this is a longer-term problem. While you may get a knee-jerk negative reaction if the GOP is not successful, markets broke out partly because they broke out. Investors were on the sidelines and saw markets go up so it cycles on itself.

President Trump is one reason markets are up but not the only reason. Buyers are still out there. They will look for their chance to get in on a break.

That said, a failure by Republicans today is a reason to discount fewer pro-business laws passing in the future. It would need to negatively get priced in to markets.

And If Republicans Get It Done?

Above we show multiple sectors and their representative ETFs and how we’d expect each to react if Republicans are successful today.

On the other hand, major indexes and their related ETFs, such as SPDR S&P 500 (NYSE:SPY), PowerShares QQQ Trust Series 1 (NASDAQ:QQQ) and SPDR Dow Jones Industrial Average (NYSE:DIA) would rally.

Of course, the inverse would also be true if they are not.

If Obamacare gets repealed, markets should go up in confidence that pro-business legislation would drive markets higher further down the road. Bonds would likely get hit because growth can drive inflation which hurts bonds. Healthcare likely gets hit because President Trump has talked strongly against healthcare companies’ pricing power.

Focus turns today to the House of Representatives to see if Republicans can actually pass something. If they can, markets have the green light to expect more pro-business legislation later this year. If not, look out. Get ready to rumble.

Disclaimer: ETFs reported by Elazar Advisors, LLC are guided by our daily, weekly and monthly methodologies. We have a daily overlay which changes more frequently which is reported to our premium members and could differ from the above report.

Portions of this article may have been issued in advance to subscribers or clients. All investments have many risks and can lose principal in the short and long term. This article is for information purposes only. By reading this you agree, understand and accept that you take upon yourself all responsibility for all of your investment decisions and to do your own work and hold Elazar Advisors, LLC and their related parties harmless. Any trading strategy can lose money and any investor should understand the risks.