The one thing we can know with certainty is it won’t be easy to profit from the crash.

After 8+ years of phenomenal gains, it’s pretty obvious the global stock market rally is overdue for a credit-cycle downturn, and many research services of Wall Street heavyweights are sounding the alarm about the auto industry’s slump, the slowing of new credit and other fundamental indicators that a recession is becoming more likely.

Few have taken the risk of projecting a date for the crash, this gent being a gutsy outlier: Hedge Fund CIO Sets The Day When The Next Crash Begins.

Next February is a good guess, as recessions and market downturns tend to lag the credit market by about 9 months.

My own scenario is based not on cycles or technicals or fundamentals, but on the psychology of the topping process, which tends to follow this basic script: 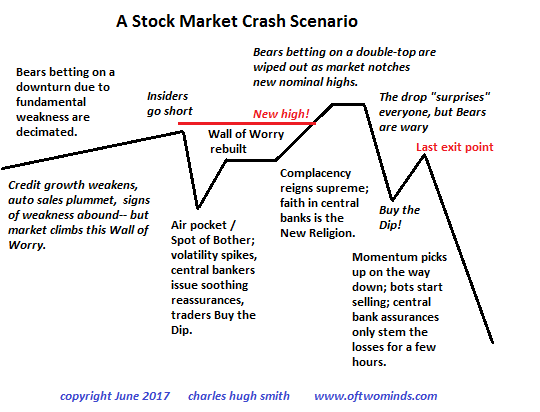 When there are too many bearish reports of gloomy data, and too many calls to go long volatility or go to cash, the market perversely goes up, not down.

Why? This negativity creates a classic Wall of Worry that markets can continue climbing. (Central banks buying $300 billion of assets a month helps power this gradual ascent most admirably.) The Bears betting on a decline based on deteriorating fundamentals are crushed by the steady advance.

As Bears give up, the window for a Spot of Bother decline creaks open, however grudgingly, as central banks make noises about ending their extraordinary monetary policies by raising interest rates a bit (so they can lower them when the next recession grabs the global economy by the throat).

A sudden air pocket takes the market down, triggered by some bit of “news.” (Nothing like a well-engineered bout of panic selling to set up a profitable Buy the Dip opportunity.)

And since traders have been well-trained to Buy the Dips, the Spot of Bother is quickly retraced.

Nonetheless, doubts remain and fundamental data is still weak; this overhang of negativity rebuilds the wall of Worry.

Some Bears will reckon the weakened market will double-top, i.e. be unable to break out to new highs given the poor fundamentals, and as a result we can anticipate a nominal new high after the Wall of Worry has been rebuilt, just to destroy all those who reckoned a double-top would mark The Top.

Mr. Market (and the central banks) won’t make it that easy to reap a fortune by going short.

As the market lofts to new nominal highs, the remaining Bears will be hesitant to go short, and Bulls will note that despite the dire warnings of analysts and the gloomy data on auto sales, credit expansion, productivity, wages, etc., the market keeps chugging higher.

This will infuse participants with complacency and a general sense that the market has weathered the worst than could be thrown at it.

When the surviving Bears have become wary, and the market’s resilience in the tide of negative news seems to point to further gains—at that point, the market finally rolls over and “surprises” everyone.

Nice, but when will this happen? Nobody knows, but the key is there can’t be a crowd of analysts predicting a decline and begging everyone to go to cash. There can’t be huge short interest and massive bets on higher volatility. Everyone betting the farm on a decline and a spike in volatility must first be destroyed before the market can possibly fall.

The crash has to catch almost everyone off guard—those who lost their shirts betting on the market responding rationally to deteriorating data (i.e. those who bet on rising volatility and a market decline), those steeped in complacency and those secure in their quasi-religious faith that the central banks “have our backs and will never let the market drop.”

When these conditions are met, the Crash-o-Meter pegs the upper limit of vulnerability.

Pavlovian training is deeply embedded, so the first drop will trigger a Buy the Dip frenzy. This reverses the downturn and creates the last exit point. But so well-trained are traders, few take the last exit; most feel assured that further gains are just ahead.

Central banks are presumed to be all-powerful, and the past 8 years support the conventional belief that a new central bank policy announcement will always reverse any downturn.

But contrary to expectations, selling momentum builds and the trading bots start selling in earnest, the goal being to liquidate the position entirely to escape risk. Central bank pronouncements steady the market and trigger wild spikes higher–but only for a few hours. Things have changed. Central banks cannot reverse the tide of fear, and spikes higher are seen as selling opportunities.

Alas, every bot has the same goal, and the bid disappears. That’s one crash scenario; there are many others. The one thing we can know with certainty is it won’t be easy to profit from the crash.